The Philippines: An Emerging FinTech Hub 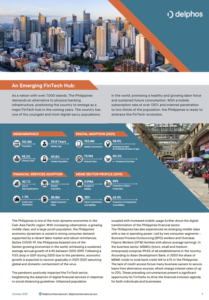 As a nation with over 7,000 islands, The Philippines demands an alternative to physical banking infrastructure, positioning the country to emerge as a major FinTech hub in the coming years. The country has one of the youngest and most digital-savvy populations in the world, promising a healthy and growing labor force and sustained future consumption. With a mobile subscription rate of over 130% and internet penetration to two-thirds of the population, the Philippines is ready to embrace the FinTech revolution.

Please fill out the form to the right in order to download this document.