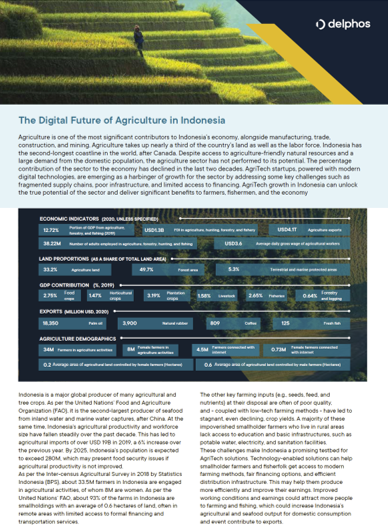 Agriculture is one of the most signiﬁcant contributors to Indonesia’s economy, alongside manufacturing, trade, construction, and mining. Agriculture takes up nearly a third of the country’s land as well as the labor force. Indonesia has the second-longest coastline in the world, after Canada. Despite access to agriculture-friendly natural resources and a large demand from the domestic population, the agriculture sector has not performed to its potential. The percentage contribution of the sector to the economy has declined in the last two decades. AgriTech startups, powered with modern digital technologies, are emerging as a harbinger of growth for the sector by addressing some key challenges such as fragmented supply chains, poor infrastructure, and limited access to ﬁnancing. AgriTech growth in Indonesia can unlock the true potential of the sector and deliver signiﬁcant beneﬁts to farmers, ﬁshermen, and the economy.

Please fill out the form to the right in order to download this document.